Taking the German IDS as a base this section looks at the external changes made to the airframe.

IDS
The key differences between the IDS and ECR is the removal of the Mauser cannons. Under the fuselage, a IRLS (infra red line scanner) and FLIR (forward looking infra red) sensor have been added. Not shown are the ELS sensors that are fitted in the wing glove and the forward fuselage. On the ECR the black panel on the wing glove is much larger than the IDS.  The image above shows the IDS and changes to the ECR are highlighted below in red.

In common with the German IDS, the RAF GR1 has two Mauser cannons.

The aerial fit on the spine and tail differs from the German variants.

The key difference between the German IDS and the GR1 is the addition of a Laser Range Finder & Marked Target Seeker (LRMTS) under the forward fuselage.

GR1
The key difference between the GR4 and the GR1 is the addition of a FLIR sensor under the fuselage. Fitting the FLIR pod necessitated the removal of one of the Mauser cannons. 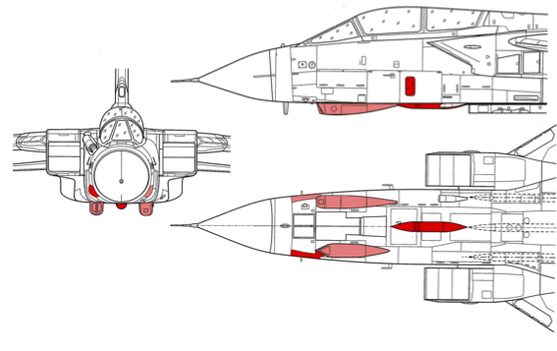 GR4a
Moving on from the GR4, The GR4a has three additional sensors, two SLIR (sideways Looking Infra Red) on each side of the fuselage and a IRLS pod fitted underneath the fuselage behind the nose wheel. The GR4a has no cannons. To make a GR1a, omit the GR4’s FLIR pod.